Isaac Davis (Woody Allen) is writing a book about his love for New York City. He is a twice-divorced, 42-year-old comedy writer for television dealing with the women in his life who quits his unfulfilling job. He is dating Tracy (Mariel Hemingway), a 17-year-old girl attending the Dalton School. His best friend, Yale Pollack (Michael […] 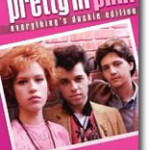 Ringwald plays Andie Walsh, a not-so-popular high school girl on the budget side of the tracks, living with her warm and loving father (Harry Dean Stanton). She usually hangs out with her friends Iona (Annie Potts) or Duckie (Jon Cryer). Duckie has always had a crush on her When a wealthy but well-meaning boy (Andrew […]

Curb Your Enthusiasm is the brainchild of star-creator Larry David who co-created Seinfeld and was the basis for the easily rattled George Costanza (who was played by Jason Alexander). Like George, David has a tendency to speak too much, blow things out of proportion, and, most often, fail in the end (and often liking it […]

Chance (Peter Sellers) is a middle-aged man who lives in Washington D.C. He has lived there his whole life. Other than gardening, his knowledge is derived entirely from what he sees on television. When the owner of the home he lives in dies, Chance is forced to leave and discovers the outside world for the […]