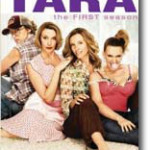 The United States of Tara is an off-centered Showtime series that has a slew of characters all in one person–prim and proper suburban housewife Alice, beer-swilling hell-raiser Buck (a male), and hard-partying teen T. All of them are portrayed by Toni Collette, who deservedly won an Emmy for her astonishing performance(s) as Tara, a wife […]

The only film critic to win the Pulitzer Prize, Roger Ebert collects his reviews from the last 30 months in Roger Ebert’s Movie Yearbook 2012. Forbes Magazine described Ebert as the “most powerful pundit in America.” In January 2011, he and his wife, Chaz, launched Ebert Presents at the Movies, a weekly public television program […]

Pat Solitano Jr. (Bradley Cooper) is released from a mental health facility into the care of his parents after eight months of treatment for bipolar disorder. During his time there, he forms a close friendship with a fellow patient, Danny (Chris Tucker), who is having legal disputes with the hospital which constantly prevents him from […]