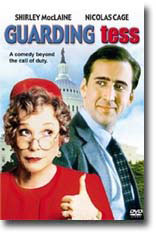 Nicolas Cage stars as Doug Chesney, in this drama-comedy about a Secret Service agent unable to get out of his assignment watching over an exasperating former first lady Tess Carlisle (Shirley MacLaine). The two get along like oil and water, but when Carlisle, a bored and feisty widow, ends up kidnapped, Cage’s agent becomes a determined avenger.

While the pairing of these two actors in a movie isn’t something most audiences would ever have considered, that’s what makes it so much fun. Cage and MacLaine are brilliantly focused in their respective parts, and filmmaker Hugh Wilson brings an unusually solid and urgent feeling to a story that might have become a dismissible light comedy in another director’s hands.

Guarding Tess is alternately funny and moving, and even includes a bit of a mystery for the Secret Service to solve. Far more than a one-dimensional film, Guarding Tess is satisfying for so many reasons; the witty script, the fine performances, the deft direction, and the mostly even pacing, to name a few.

If you pay attention in the movie you will see why the First Lady actually loves the agent so much and wants him with her. In this manner, the picture shows us a very accurate relationship that occurs between agent and his protectee.

When Tess is kidnapped, Doug and his team take the steps necessary to find her, even when the odds are against them. You’ll laugh, cry and see two strong willed people overcome life’s adversities. A must have in your family collection.