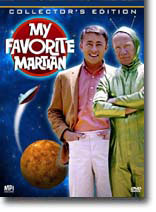 In this classic series, an exoanthropologist from the planet Mars, becomes stranded on Earth after his one-man spaceship narrowly misses a NASA rocket plane and crashes near Los Angeles. The alien is rescued by Tim O’Hara (Bill Bixby), a newspaper reporter who explains the Martian to friends and authorities by introducing him as his Uncle Martin (Ray Walston).

“Uncle Martin” looks human, except when he extends his retractable antennae with which he can become invisible. His special powers and unusual illnesses present a constant challenge to Tim in his efforts to preserve his friend’s cover.

My Favorite Martian is one of those great television shows that we all long for – at least those of us who miss good solid family TV entertainment. A half century after it was made, you can still laugh and smile while watching a black and white show that has quality, rather than computer generated graphics that bring no human consideration to good old entertainment just like all TV shows and movies should be.