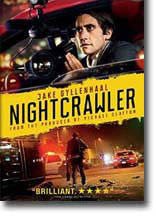 Nightcrawler is a thriller set in the nocturnal underbelly of contemporary Los Angeles. Jake Gyllenhaal stars as Lou Bloom, a driven young man desperate for work who discovers the high-speed world of L.A. crime journalism.

Finding a group of freelance camera crews who film crashes, fires, murder and other mayhem, Lou muscles into the cut-throat, dangerous realm of nightcrawling – where each police siren wail equals a possible windfall and victims are converted into dollars and cents. Aided by Rene Russo as Nina, a veteran of the blood-sport that is local TV news, Lou blurs the line between observer and participant to become the star of his own story.

The movie does a great job of exploring the underground world of the “nightcrawler”, as these freelance cameramen are called. It was a nitty gritty film, but also pretty comedic. Jake Gyllenhaal did an amazing job in his role. I empathized with his character because he just seemed so alone and was trying so hard at times, yet he was just so weird and off the mark. At times he was a jerk and creepy, while other times he seemed overeager and simply lacking in social skills.

With no back story as such, Lou is clearly a sociopath, and rather naive, considering. Yet he triumphs through being bright, following his business plan, discarding middle class morality and exploiting anyone and everyone. The film does not pretend to focus on crime and criminals other than through the narrow lens of popular culture, and in this limited optic it succeeds.

From small corruptions (moving fridge photos in a victim’s kitchen), Lou moves up the greasy pole through major obstructions and perversions of justice, his success made believable by Gyllenhaal’s terrific grinning, swivel-eyed-loon malefactor. Also note: Rene Russo, cast again as the `strong older woman’, impressive as the TV exec. who realizes the glass ceiling needs constant hammering, even if it means spending time with Mr. Wrong; an unrecognizable Bill Paxton as a cynical competitor and Riz Ahmed, playing Lou’s sad-sap outworker wannabe.