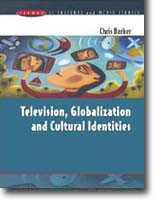 This introductory text examines issues of television and cultural identities in the context of globalization. It is a wide-ranging volume, exploring many of the central cultural issues in contemporary cultural studies, such as media, globalization, language, gender, ethnicity, cultural politics and identity – perhaps the topic of cultural studies over the past decade.

Television, Globalization and Cultural Identities looks are the following questions:

The book will be essential reading for undergraduate and postgraduate courses on television and cultural identities in the fields of cultural studies, communications, media studies and sociology, with a wider appeal to those with an interest in the television industry. Key concepts are introduced and explained for those new to cultural studies, whilst debates are extended and enriched for those already familiar with them. The text is well structured, links the vocabularies of media studies and cultural studies, and is supported by original case study material.

As an introduction to cultural studies, with very clear capsule reviews of complex interdisciplinary literature, it will be a useful supporting text for many cultural geography courses. As a focus on key debates about identity and cultural politics this book is highly successful.