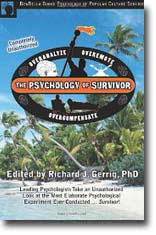 The Psychology of Survivor is a collection of essays on the popular reality show, Survivor, and is not authorized by CBS, writers, creators, or producers of Survivor, or anyone associated with the show. From situational ethics and tribal loyalties to stress and body image, this collection of essays employs cutting-edge psychology to delve into the dynamics of the hit television show Survivor.

Containing new thoughts and theories on the past 13 seasons of the show—which many consider the mother of reality television—this analysis looks at the root behaviors and emotions that come to light while people are being filmed competing for a large sum of money while stranded on a deserted island.

Insight into the program’s psychodynamics explores why macho alpha males rarely win, what makes fellow survivors like one another, and why the behavior of certain players, such as Rob Cesternino, became infamous. Many of the authors wax nostalgic about the first series, ‘Borneo’ in which an air of suspense hung around what the outcome of this bold, new experiment in group behavior might be. In fact, readers should be advised that ‘Borneo’ contestants are frequently referenced, which probably makes one’s knowledge of the classic first season requisite to gaining full benefit from the book.

Richard Hatch serves as a particularly important topic: Kevin Apple and Melissa Beers contending that Mr. Hatch’s allied voting strategy befuddled the director’s intent to produce a Darwinist struggle of the fittest; P.A. Hancock drills into Mr. Hatch’s personality to find that he used an extraordinary mix of rational and intuitive thinking processes to persevere; and Vivian Hayas highlights the situational contexts that played to Mr. Hatch’s advantage and led him to victory. Reflecting upon these and a number of other astute analyses, we can ponder the meaning of the Survivor contestants’ struggles and relate the lessons learned to our own life experiences.

On the other hand, Anne Moyer believes that the stress induced by the promise of a $1 million prize and extreme competitiveness amounts to an unethical and unacceptable exploitation of Survivor contestants by its producers. And, with tongue planted firmly in cheek, Robert Batsell proposes an outrageous reality TV program that should give us pause as to how far the public might be willing to allow the entertainment industry to go in attempting to justify highly-questionable scripts in pursuit of mass ratings.