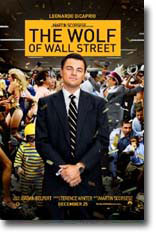 Revered filmmaker Martin Scorsese directs the story of New York stockbroker Jordan Belfort (Leonardo DiCaprio). From the American dream to corporate greed, Belfort goes from penny stocks and righteousness to IPOs and a life of corruption in the late 80s. Excess success and affluence in his early twenties as founder of the brokerage firm Stratton Oakmont warranted Belfort the title – “The Wolf of Wall Street.”

Money. Power. Women. Drugs. Temptations were for the taking and the threat of authority was irrelevant. For Jordan and his wolf pack, modesty was quickly deemed overrated and more was never enough.

Based on the true story of Belfort, from his rise to a wealthy stockbroker living the high life to his fall involving crime, corruption and the federal government. Belfort, a Long Island penny stockbroker who served 36 months in prison for defrauding investors in a massive 1990s securities scam that involved widespread corruption on Wall Street and in the corporate banking world, including shoe designer Steve Madden.

Yes, the film is vulgar, it is shocking, and it is offensive, but so are the characters. They are greedy, morally reprehensible characters, but this film does not reward them. In this film, they are the butt of the joke.