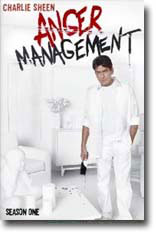 Charlie Sheen makes his return to series television in the new sitcom, Anger Management. Sheen stars as “Charlie,” a non-traditional therapist specializing in anger management. He has a successful private practice, holding sessions with his group of primary patient regulars each week, as well as performing pro bono counseling for an inmate group at a state prison

.Charlie thrives on the chaos in his life while still battling his own anger issues. His life is complicated by his relationships with his own therapist/best friend (Selma Blair), an ex-wife whose positive outlook but poor choices in men frustrates Charlie (Shawnee Smith), and their 13-year-old daughter who has OCD (Daniela Bobadilla).

As a retired Baseball player turned shrink, Sheen does shine through. The world does revolve around his character. He needs more development to grow in this series. there are times Sheen seems like he is phoning his performance in rather than allowing himself to be a full comedic speed. Charlie does grow on you, I want to see what he will do in season two with the addition of Martin Sheen playing his dad as a regular.