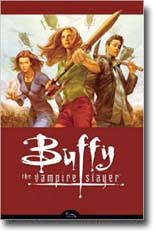 A young girl, Buffy Summers (Sarah Michelle Gellar), finds herself destined to slay vampires, demons and other infernal creatures, as well as dealing with her life fighting evil, with the help of her friends.

Writer-director Joss Whedon’s surprisingly visionary Buffy the Vampire Slayer is collected here in it’s entirity in this handsome collection. Throughout the show’s seven seasons, the tone of the show matured from a teen-esque drama with vampires to a girl accepting her destiny and facing an oncoming apocalypse, and to the surprise of many the show actually worked thanks to the stong cast and pop-culture laced dialogue, and some astonishingly human stories.

The cast is and has always been excellent, from Gellar deserving a host of Emmy’s for her performances (especially during the second and sixth season’s), to Brandon and Hannigan’s comic turns, to Marsters’ turn from evil villain to a redemption seeking, and eventually reluctant, hero. For longtime Buffy fans, you already know what’s in this box, and if you’re a late fan to the show, then consider this box set worth owning.