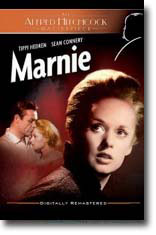 Marnie is an in-depth character study of a truly unhappy woman (Tippi Hedren) and the pathological man (Sean Connery) who loves her. In some ways, this one is every bit as riveting and fascinating and anything Hitchcock ever did. For example, when Marnie enters the Rutland mansion in her riding habit wielding a pistol after the foxhunting sequence you’ll be at the edge of your seat to see what she’ll do.

Marnie was a critical fiasco when it came out in the early 1960s and Hedren was widely blamed for the film’s failure. However, with the passage of time, most film critics now see it as one of Hitchcock’s greatest masterpieces from his late mature period on par with Vertigo, Psycho, and The Birds. For those new to Hitchcock and his themes, Marnie may seem to lack of a typical mystery or suspense plot may seem surprising for those expecting Hitchcock’s more obvious bag of tricks.

The linchpin of the film is Hedren, who gives what must be the most underrated performance in a Hitchcock movie and clearly one of the very finest. Her refusal to warm up either to Connery’s character or to screen made it a difficult performance for many to understand, but those who dismiss it are missing a great character.

Her joy when Connery brings her beloved horse to the mansion, her lightning-fast changes of mood during the word-association scene, and her faltering childlike tones during the film’s conclusion show how talented Hedren really is. You only have to see her incredible facial expression during the hunting scene when the hounds are killing the fox and her aristocratic friends are laughing to appreciate the many facets of Hedren and the character Marnie.