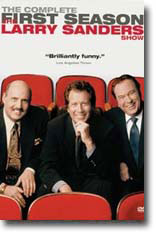 The Larry Sanders Show is perhaps the most realistic and funniest television series ever written about show business. In this case, the “business” is producing a late night talk show hosted by the amiable, humorous Larry Sanders, a Johnny Carson-like character deftly portrayed by Garry Shandling. Shandling is also the creator and frequent writer of this series.This classy television series shrewdly examines the behind-the-scenes and in front of the camera workings of a nightly television show. “The Larry Sanders Show” is a compendium of network executives, producers, actors, and agents whose enlarged yet fragile egos often clash with each other. The results are caustic and hilarious.

But the boundless pleasures of The Larry Sanders Show make each episode ripe for repeat viewings (in which you can catch and savor the nuances of the performances or the throw-away brilliance of the dialogue). Adding to the fun and verisimilitude are the celebrity guest stars who tweak their personas.

There’s a less-than-gracious Burnett in the episode “Spiders,” a duplicitous Carvey in “The Guest Host,” and an insecure Williams in “Hank’s Contract.” The first disc contains an interview of Shandling conducted by Pulitzer Prize-winning television critic Tom Shales. No flipping, lest you miss the great “Rip Torn story” on how the formidable actor was cast.