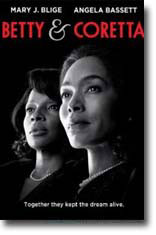 Betty & Coretta is a film produced by Lifetime about two extraordinary women; Coretta Scott King (Angela Bassett), wife of Martin Luther King, Jr., and Betty Shabazz (Mary J. Blige), wife of Malcolm X. King. After their husbands’ tragic assassinations, they developed a unique friendship spanning three decades as they carried on the Civil Rights movement while supporting their families as single mothers. Through their strength and dignity, they became role models for millions of women.

This film shows the friendship and struggles of the two women. Betty’s difficulties are more with family than with her husband’s movement. Her life was utterly destroyed with the death of Malcolm X. While the film attempts to show how strong and resilient she was, it is clear that the personal set backs weighed heavily on her life.

In the film, Coretta is somewhat less focused upon. Her struggles with making a national holiday for her husband appear to be her central cause, as well as suppressing a set of FBI tapes that could be potentially damaging to her husband’s reputation. Unfortunately, very little of the film shows rallies that they attended or headed up; few speeches that they made; or how they lobbied for reform.

Part of the problem is that there simply isn’t time to cover an adequate cross section in several decades worth of living for independent storylines about two such important women. Additionally, the two characters (both prominent figures) didn’t really share much time together. Ruby Dee acts as the narrator of the piece which basically presents vignettes at different points in each woman’s life.

The timeline can rush forward and the actresses don’t age appreciably throughout, so it can be somewhat disconcerting. Just as something fascinating is occurring, we are pushed ahead to the next “significant moment.” This technique prevents us from being able to do as in depth a character analysis of either woman as we might like.