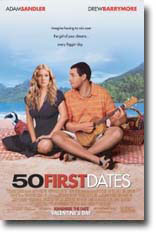 With generous amounts of good luck and good timing, 50 First Dates set an all-time box-office record for the opening weekend of a romantic comedy; whether it deserved such a bonanza is another issue altogether. It’s a sweet-natured vehicle for sweet-natured stars Adam Sandler and Drew Barrymore.

While the well-matched lovebirds wrestle with a gimmicky plot (she has no short-term memory, so he has to treat every encounter as their first), director Peter Segal gnores the intriguing potential of their predicament  and peppers the proceedings with the kind of juvenile humor that Sandler fans have come to expect.

The movie sneaks in heartfelt moments amidst its inviting Hawaiian locations, and that trained walrus is charmingly impressive. One of the impressive things about this movie is that it does not cop out. Dr. Keats (Dan Aykroyd), Lucy’s doctor, tells us repeatedly that Lucy is never going to get better and a lot of the power of this movie comes from the different ways in which Lucy and Howard deal with this hard reality.

We also learn that for Lucy and his family there are what her dad calls “bad” days, and it because of them that Henry is inspired to try something different and provide another series of sweet moments in the film.

As long as he refrains from going into overdrive, Sandler makes it totally believable that Henry would spend every day trying to get Lucy to fall in love with him. But it is Barrymore who is pitch perfect on both the comedy and the pathos of her role as Lucy.