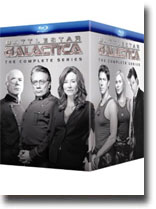 The second war against the Cylons is over and The Twelve Colonies have been destroyed. Now Commander Adama of the Battlestar Galatica and President Laura Roslin lead a ragtag fleet of refugees in a supposed search for the fabled lost thirteenth colony, Earth. However, the dangers they face are many which compound an already difficult situation.

In addition to the Cylons hunting and attacking the fleet in space, their infiltrator units carry out a more subtle plot even as their former unwitting pawn, Gaius Baltar, helps in the hunt for them while hiding both his own guilt and the strange presence that haunts his every thought. If that wasn’t enough, the fleet also faces internal political conflict in which the rabble-rousing figure, Tom Zarek, is merely the loudest dissenting voice. In the midst of these trials however, clues begin to appear that suggest that Adama’s simple bluff about Earth may be more truthful than anyone could have guessed.

Battlestar Galactica’s Edward James Olmos wasn’t kidding when he said “the series is even better than the miniseries.” As developed by sci-fi TV veteran Ronald D. Moore, the “reimagined” BG is exactly what it claims to be: a drama for grown-ups in a science-fiction setting. The mature intelligence of the series is its greatest asset, from the tenuous respect between Galactica’s militarily principled commander Adama (Olmos) and politically astute President Roslin (Mary McDonnell) to the barely suppressed passion between ace Viper pilot “Apollo” (a.k.a. Adama’s son Lee, played by Jamie Bamber) and the brashly insubordinate Starbuck (Katee Sackhoff), whose multifaceted character is just one of many first-season highlights.

Picking up where the miniseries ended (it’s included here, sparing the need for separate purchase), season 1 opens with the riveting, Hugo Award-winning episode “33,” in which Galactica and the “ragtag fleet” of colonial survivors begin their quest for the legendary 13th colony planet Earth, while being pursued with clockwork regularity by the Cylons, who’ve now occupied the colonial planet of Caprica.

The fleet’s hard-fought survival forms (1) the primary side of the series’ three-part structure, shared with (2) the apparent psychosis of Dr. Gaius Baltar (James Callis) whose every thought and move are monitored by various incarnations of Number Six (Tricia Helfer), the seemingly omniscient Cylon ultravixen who follows a master plan somehow connected to (3) the Caprican survival ordeal of crash-landed pilots “Helo” (Tahmoh Penikett) and “Boomer” (Grace Park), whose simultaneous presence on Galactica is further evidence that 12 multicopied models of Cylons, in human form, are gathering their forces.