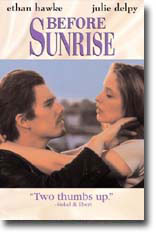 This romantic, witty, and ultimately poignant glimpse at two strangers (Ethan Hawke and Julie Delpy) who share thoughts, affections, and past experiences during one 14-hour tryst in Vienna somehow remains writer/director Richard Linklater’s most overlooked gem. Celine (Delpy), a stunning, low-key Parisian, meets Jesse (Hawke) the stammering American, as the two share a Eurorail seat. She’s starting school in Paris, and he’s finishing a vacation. Their mutual attraction leads to an awkward meeting (beautifully played by each performer), and Jesse suggests that Celine spend his remaining 14 hours in Vienna with him.

Typically, this skeleton is as much plot as Linklater provides; as usual, he’s more interested in concentrating his talents on observing the casual, playful conversations between his leads. His tight time frame allows the characters to say anything to one another, and topics ranging from politics to past romances to fears of the future flow with subtle finesse. The short time frame is also cruel, however, because beneath this love affair lies the painful reality that the two most likely will never see each other again and will be left only with memories, an idea that Linklater drives home with an effective snapshot conclusion.

Before Sunrise contains many sharp perceptions on human nature and yet there are flawed humans rather than stereotypes so often seen in films. The protagonists’ frank revelations and heated exchanges flow in a stream-of-consciousness style, and its no accident that Linklater set the film in Vienna, where Freud invented and practiced psychotherapy.