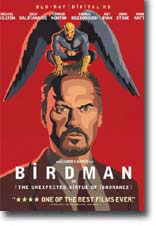 Set in the heart of New York City, Birdman focuses on Riggan Thomson (Michael Keaton), a washed-up actor who gained fame for his role as the iconic superhero Birdman. Trying to overcome his ego 12 years later, he adapts and stars in his own Broadway play hoping to reclaim his spot as an important actor. We see the ups and downs of this production along with the odd way his psyche works, his inner voice being the Birdman character.

There’s also many other facets, including the quarrels between Keaton and Edward Norton’s character (one of the main stars of the play), all equally entertaining.

The writing is top-notch, serving up witty and funny moments throughout, and each member of the cast delivers a fantastic performance. It also includes a brilliant musical score, entirely done with drums. And despite its flaws, mostly in a few goofy moments, it isn’t one to miss.

Birdman is such a hard movie to describe. It’s one of those films that doesn’t fit into any one genre (or any two for that matter) and its wide array of interesting characters can’t be easily summed up. But, that may be the reason why the film is so absorbing. It has so many original qualities that certainly don’t fit into the standard mold of what a star-studded movie should be, instead putting a strange (but fascinating) spin on your typical drama.