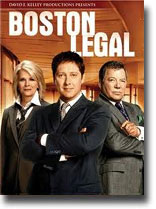 Led by an Emmy Award-winning cast (James Spader, Denny Crane and Candice Bergen), “Boston Legal” tells the professional and personal stories of a group of brilliant but often emotionally challenged attorneys. Fast-paced and darkly comedic, the series confronts social and moral issues, while its characters continually stretch the boundaries of the law.The classic combination of James Spader and William Shatner is just one of many reasons to savor the inaugural 17-episode season of Boston Legal. Making its highly rated ABC debut on October 3, 2004, this darkly comedic spinoff from The Practice looked like a formulaic reworking of creator David E. Kelley’s previously successful series Ally McBeal, with similar plots and quirky characters enmeshed in personal and professional affairs of the heart at the prestigious Boston law firm of Crane, Poole & Schmidt. It quickly became apparent that Kelley, co-executive producer Bill D’Elia, and the show’s magnificent ensemble cast were onto something equally fresh, funny, and infectiously entertaining.

Both Shatner and Spader won Emmys for their original roles on The Practice, and the priceless pairing of the erratic, egomaniacal senior partner Denny Crane (Shatner, doing the best work of his career) and ethically challenged attorney Alan Shore (Spader, likewise) signaled the arrival of one of the finest comedic duos in TV history.

Waging a two-man war on political correctness, the boisterous has-been Denny loves the sound of his own name (the mere mention of “Denny Crane” qualifies as ego-stroking foreplay), unabashedly subjects female associates to his lascivious advances, and (in creator Kelley’s words) “trades on the currency of his reputation” as an undefeated trial attorney.

As the show’s fascinating heart and soul, Alan Shore is a walking contradiction, and Spader plays him perfectly as a charismatic, self-loathing lothario who’ll bend the law to suit his higher purposes. Deeply cynical yet fiercely committed to his own complex and compassionate moral code, he’s brazenly open about his sexual appetites as he savors the affections of smart, sexy associates Sally Heep (Lake Bell), and Tara Wilson (Rhona Mitra), whose relationship with Shore grows strained as the season progresses.