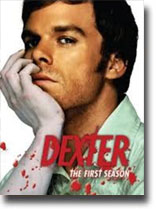 Dexter is based on the compelling novel “Darkly Dreaming Dexter” by Jeff Lindsay. Orphaned at the age of four and harboring a traumatic secret, Dexter Morgan (Dexter Morgan (Emmy- and Golden Globe- nominated actor Michael C. Hall from “Six Feet Under”) is adopted by a police officer who recognizes Dexter’s homicidal tendencies and guides his son to channel his gruesome passion for human vivisection in a constructive way – by killing those heinous perpetrators that are above the law or who have slipped through the cracks of justice.

A respected member of the police force, a perfect gentleman and a man with a soft spot for children, it’s hard not to like Dexter. Although his drive to kill is unflinching, he struggles to emulate normal emotions he doesn’t feel, and to keep up his appearance as a caring, socially responsible human being.

An interesting and original idea that’s very skillfully executed, Showtime’s Dexter is never less than watchable, often quite compelling, and sometimes thoroughly riveting. As the 12 episodes from the show’s first season (packaged here in a four disc set) reveal, it’s also the epitome of “high concept,” a kind of Silence of the Lambs for the C.S.I. generation.

He has an avocation, too: during his off hours, he tracks down some very, very bad people who for various reasons have eluded the proper authorities. Seems his adoptive father, a cop himself, taught the kid how to channel his dark side in a “positive” direction; and so, having captured these evildoers (including a child molester-murderer and a recidivist drunk driver with a trail of bodies in his wake), Dex dispatches them with clinical precision, thus making him a serial killer who snuffs serial killers. But there’s more–much more, as it turns out.

By his own description, Dexter is “a monster,” an empty shell who fakes all human interactions and admits to no real feelings for anything or anyone, including his foster sister (Jennifer Carter) and his nominal girlfriend (Julie Benz), a former crack addict and battered spouse who’s as uninterested in sex as he is.

There’s an explanation for Dexter’s weirdness, of course, one so deep and traumatic that even he isn’t aware of it. It’s gradually revealed over the course of the season as he and the cops (who include Erik King, Lauren Velez, and David Zayas, all first-rate) track down the so-called “Ice Truck Killer,” a fellow monster whose grisly m.o. both fascinates and taunts our hero, leading to a genuinely shocking and squirm-inducing finale.

Dexter can be a bit arch, with an ironic, too-hip-for-the-room tone that get a little old. Still, it’s a safe bet that anyone who views this first season will be salivating for the second. Extras include audio commentary on two episodes, a featurette about real-life blood spatter analysis, and a variety of DVD-ROM items.