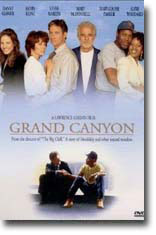 When a lawyer’s (Kevin Kline) car breaks down in a dangerous Los Angeles neighborhood, a tow-truck driver (Danny Glover) arrives just in time to save his life. The two men begin a deep friendship that sets off a chain of unsettling and surprising events involving their families and friends for years to come.

Lawrence Kasdan’s powerful, uplifting film about the harsh realities of contemporary urban life and on keeping faith in our troubled times is filled with random violence, venality, ubiquitous police presence, earthquakes, and dreams. The film concerns an unusual intersection of lives and chance occurrences that alter everyone’s perspective on destiny.

Early in this film one of the characters makes the observation that half of the people in the city of Los Angeles live every day on the verge of hysteria. It is further noted that the other half are hysterical, and the predominant aspect of their lives is attempting to control their constant fear; fear generated entirely by the very nature of their environment, and just the way things are.

Through the storytelling if different characters, the director is attempting to create an experience for viewers as intuitive as the undefined forces propelling his characters. For example, Steve Martin has an interesting part as a garish film producer who undergoes a change in priorities after being assaulted on the street.