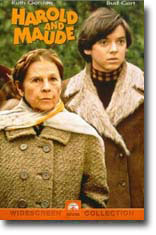 Self-destructive and needy but wealthy teenager Harold (Bud Cort) is obsessed with death and spends his leisure time attending funerals, watching the demolition of buildings, visiting junkyards, simulating suicides trying to get the attention of his indifferent, snobbish and egocentric mother, and having sessions with his psychologist.

When Harold meets the anarchic seventy-nine-year-old Maude (Ruth Gordon) at a funeral, they become friends and the old lady discloses other perspectives of the cycle of life for him. Meanwhile, his mother enlists him in a dating service and tries to force him to join the army. On the day of Maude’s eightieth birthday, Harold proposes to her but he finds the truth about life at the end of hers.

Black comedies don’t come much blacker than this cult favorite and they don’t come much funnier, either. It seemed that director Hal Ashby was the perfect choice to mine a mother lode of eccentricity from the original script by Colin Higgins, about the unlikely romance between a 19-year-old Harold and a life-loving 79-year-old Maude.

Maude finds something oddly appealing about Harold, urging him to “reach out” and grab life by the lapels as opposed to dwelling morbidly on mortality. Harold grows fond of the old gal–she’s a lot more fun than the girls his mother desperately matches him up with–and together they make Harold & Maude one of the sweetest and most unconventional love stories ever made.

Much of the earlier humor arises from Harold’s outrageous suicide fantasies, played out as a kind of twisted parlor game to mortify his mother, who’s grown immune to her strange son’s antics. Gradually, however, the film’s clever humor shifts to a brighter outlook and finally arrives at a point where Harold is truly happy to be alive.

Featuring soundtrack songs by Cat Stevens, this comedy certainly won’t appeal to all tastes (it was a box-office flop when first released), but if you’re on its quirky wavelength, it might just strike you as one of the funniest movies you’ve ever seen.