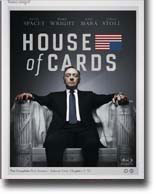 Kevin Spacey plays congressman Frank Underwood, a very bright, savvy individual who knows his way around Capitol Hill. He knows how to get things done because he knows what’s in people’s souls and how to play them to his advantage.
His wife, Claire (Robin Wright) heads up a a more socially conscious organization in the private sector but is no less addicted to power than her husband. They have a peculiar relationship to say the least. This is almost a diary of the various ‘projects’ in which they are involved and how they play them, even when unforeseen things happen.
This is some ugly, scary stuff. In my heart of hearts I don’t want to believe this view of our government, but I fear it is probably a closer take on reality than is “The West Wing.” The manipulation of people, the press and other politicians will make you puke in your shorts. The relationship between Frank and Claire alone can only make me wonder what world they must have lived in as children that allowed them to grow up in a way that would make them think behavior like this was Okay.David Fincher (one of my favorite directors) helmed the first 2 episodes and well establishes the color and tone for the rest of the series. There is a greenish pallor to it which gives it a sickly feel. All the acting is top shelf and a fleet of veterans are on hand to insure that. The directing is good. The writing is exceptional. This is as good as any series I’ve seen on TV.