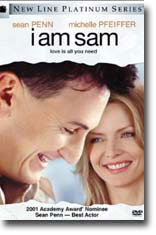 I Am Sam makes you laugh, cry, and recoil all at the same time. Perhaps no other film of recent memory has epitomized the shameless sentimentality of Hollywood as succinctly as director and screenwriter Jessie Nelson’s story of a mentally challenged man fighting to retain custody of his 7-year-old daughter.

Sam (Sean Penn), who has the mental age of 7, wipes down tables at a Los Angeles Starbucks and takes good care of his daughter Lucy (Dakota Fanning), who was left with him shortly after birth by a homeless woman.

Sam has gotten by just fine with a little help from his friends, including his eccentric neighbor (Dianne Wiest) and a lovable group of similarly challenged friends, but a series of misunderstandings leaves Sam fighting to get Lucy back from the state. Sam’s lawyer, Rita Harrison (Michelle Pfeiffer), is an overly ambitious woman whose life is soon transformed by proximity to Sam’s brimming humanity.

Sean Penn is, as usual, wholeheartedly committed to his role and turns in an admirable, if overtly affected performance. However, I Am Sam, with all its earnest charm, reaches an emblematic low when Sam, a character apparently devoid of any authentic sentiment, delivers a courtroom speech memorized from Kramer vs. Kramer as the film’s finale.

The love that the entire cast and crew put into the project radiates from the scene and generates enough goodwill to forgive the occasionally languid pacing. Sean Penn’s nomination was absolutely well-deserved, and Dakota Fleming does a great job of Sam’s daughter. Some magnificent supporting turns by Laura Dern, Diane Wiest, Stanley DeSantis, and two actually mentally handicapped actors, help carry the somewhat airy/sappy script through some of its less credible moments.