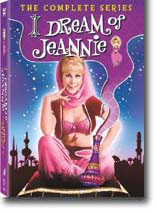 Air Force captain Anthony “Tony” Nelson (Larry Hagman) is stranded on a desert island after his space capsule malfunctions on re-entry. While he is there, he finds a bottle and upon opening it he releases a beautiful genie named, coincidentally, Jeannie (Barbara Eden) who was trapped in the bottle by the evil Blue Djinn (Michael Ansara). Eventually, Tony is rescued and he brings Jeannie back with him.

The only other person who knows of her existence is Tony’s best friend, Army captain Roger Healey (Bill Daily). Tony tries to keep her existence a secret from Air Force psychiatrist Colonel Alfred Bellows (Hayden Rorke) and his wife Amanda (Emmaline Henry) and he is successful for a few years until he asks Jeannie to marry him. He then reveals Jeannie’s existence, but not her powers, to the world.

You’ve got a blond bombshell, who is eager to please in every way a man could imagine, living out of wedlock with an astronaut, who represented the most heroic all-American roll models we had back in the 1960’s. And somehow, for years, this show provided good clean TV fun for millions of viewers.