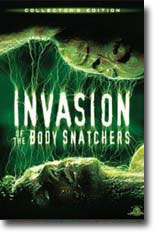 This acclaimed 1978 version from director Philip Kaufman is every bit as creepy as the ’56 original, and it fits perfectly into the cycle of paranoid thrillers that thrived in American movies of the 1970s.

Kaufman stylishly directs from an intelligent screenplay by W.D. Richter, while Donald Sutherland and Brooke Adams lead a distinguished cast (Jeff Goldblum, Leonard Nimoy, and Veronica Cartwright) and must fight for survival as the population of San Francisco is systematically cloned by alien “pods” from a distant, dying planet.

The atmosphere of dread and paranoia grows increasingly intense as the complexity of the alien invasion is gradually revealed, until nobody can be trusted to be who they appear. Finely tuned performances enhance the film’s eerie atmosphere, highlighted by moments that will lurk in your memory long after the movie’s over.