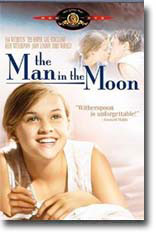 Rural Louisiana, summer of 1957, Elvis is King. At 14, Danielle ‘Dani’ Trant (Reese Witherspoon) is coming of age. Her 17-year-old sister (Emily Warfield) is beautiful, smart, and off to Duke in the fall; her mom’s (Tess Harper) pregnant with number four, and Dad’s (Sam Waterston) pretty strict.

Life gets sweeter when 17-year-old Court Foster (Jason London), his widowed mom (Gail Strickland), and two little brothers (Derek Ball, Spencer Ball) move into the vacant farm next door. Court likes Dani’s high spirits and direct way, and though he has a man’s responsibilities on the farm, they go off swimming sometimes.

The waters of adolescence are deeper than Dani realizes as hers and Court’s feelings get jumbled. Then Mother Nature throws wrenching surprises at Dani, and she must come to terms with new emotions.

A jewel of a sleeper, The Man in the Moon comes off as a nearly perfect short story of the two Trant sisters’ first competition in the field of love. As Dani and Court become great friends, Court seems more interested in Maureen, who is blossoming. Dani will look for any justification why she should be with Court, but as human law dictates, there is no cure for a 14-year-old with a crush.

The film is another winning portrayal of small-town adolescence from director Robert Mulligan. His eye for casting is impeccable and the film does not shy away from its look at budding sensuality, or a horrific and emotional accident. Of course, with love comes heartache, and the sisters soon learn a tough life lesson when tragedy strikes and the strength of their bond is the only thing that will keep their hearts from breaking.