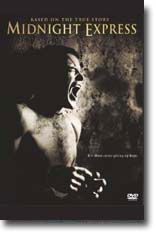 With the Turkish government trying to crack down on drugs, terrorism and crime, Billy Hayes (Brad Davis) has the misfortune of being caught in 1970 at the border with 2 kilos of hash stash. At first sentenced to four years and two months for drug possession, his prison term grows to 30 years when the prosecution’s appeal finds him guilty of smuggling. Pleas from his parents, litigation from his lawyer and actions from the U.S. Embassy amount to nothing.

Things get worse when Hayes is sent to a detention center for the mentally unstable after he bites off a warden’s tongue to prevent him from divulging his escape plans. Forced to struggle with daily violence, despair and abuse, he finally reaches his breaking point and is willing to do anything to escape. Knowing that he is on his own, Hayes has one risk left to take: riding his own Midnight Express.

Forever embroiled in controversy, Midnight Express divides viewers into opposing camps: those who think it’s one of the most intense real-life dramas ever made, and those who abhor its manipulative tactics and alteration of facts for the exploitative purpose of achieving a desired effect. That effect is powerfully achieved, regardless of how you may feel about director Alan Parker and Oliver Stone’s interpretation of the story of Hayes.

Davis gives an unforgettable performance stuck in a hellish Turkish prison for 4 year with his sentence extended to 30 years before his escape in 1975. Unquestionably, this is a superbly crafted film, provoking a visceral response that’s powerful enough to boil your blood. By the time Hayes erupts in an explosion of self-defensive violence, it is clear how he was pushed to the breaking point.