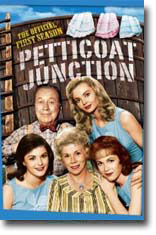 Songwriter Paul Simon said it best: Everybody loves the sound of a train in the distance. Especially when that train is the Hooterville Cannonball (“the train that’s loved by all”), whose heralding whistle sets this charming series’ classic theme song in motion. An instant hit in its first season, Petticoat Junction, like The Andy Griffith Show is the chance to spend quality time with “some decent folks.”

Other colorful characters include Cannonball engineers Charlie (Smiley Burnette) and Floyd (Rufe Davis), more interested in life’s simple pleasures, like fishing, than running the train on time, and Sam Drucker (Frank Cady), the “self-described general store keeper, notary republic, and town wit.” Throughout the first season, Kate and company thwart efforts by Homer Bedloe (Charles Lane), “the most ruthless man since Ivan the Terrible,” to put the Shady Rest out of business and shut down the Cannonball, the antiquated steam train that time, and the C.F. & W Railroad forgot.

Created by Paul Henning, Petticoat Junction is not as widely syndicated or popularly known as his other series, The Beverly Hillbillies and Green Acres, but it’s a pleasure to rediscover. One episode for the ’60s time capsule, broadcast just a little over a month after the Beatles appeared on The Ed Sullivan Show, is “The Ladybugs” in which Beatlemania hits the valley, and Uncle Joe transforms the Bradley girls into a girl rock group.

Dennis Hopper, of all people, appears as a beatnik in the episode, “Bobby Joe and the Beatnik.” Vintage TV fans will have fun spotting Ken “Eddie Haskell” Osmond as a suitor for Billie Jo in “The Genghis Keane Story” (the same episode introduces future Green Acres scene stealer Hank Patterson as pit-toting farmer Fred Ziffel); Sheila James (Zelda on The Many Loves of Dobie Gillis) as a fellow Ladybug, and Steve Franken (Chatsworth Osborne, Jr. on Gillis) as Homer Bedloe’s chip off the old block son, who has a change of heart after spending time at the Shady Rest in “Bedloe and Son.”

This set benefits from episode introductions and affectionate recollections by Kaye and Woodall. So, like the song says, forget about your cares, it is time to relax at the Junction. As Bedloe, Jr. proclaims, “A fella could get used to a life like this.”