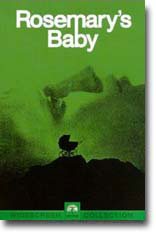 Possibly the best horror film ever made, this brilliant adaptation of Ira Levin’s best-selling novel is the story of a loving young New York City couple who are expecting their first child. Like most first-time mothers, Rosemary (Mia Farrow) experiences confusion and fear.

Her husband (John Cassavetes), an ambitious but unsuccessful actor, makes a pact with the devil that promises to send his career skyward. Director Roman Polanski elicits uniformly extraordinary performance from the all-star cast. Ruth Gordon won an Oscar for her performance as an oversolicitous next-door neighbor in this classic chiller.

Psychological terrorism and supernatural horror have rarely been dramatized as effectively as in this classic 1968 thriller, masterfully adapted and directed by Roman Polanski from the chilling novel by Ira Levin.

Rosemary  is a young, trusting housewife in New York whose husband, unbeknownst to her, has literally made a deal with the devil. In the thrall of a witches’ coven headquartered in their apartment building, the young husband arranges to have his wife impregnated by Satan in exchange for success in a Broadway play.

To Rosemary, the pregnancy seems like a normal and happy one–that is, until she grows increasingly suspicious of her neighbors’ evil influence. Polanski establishes this seemingly benevolent situation and then introduces each fiendish little detail with such unsettling subtlety that the film escalates to a palpable level of dread and paranoia.

By the time Rosemary discovers that her infant son “has his father’s eyes” and the urge to scream along with her is unbearably intense. One of the few modern horror films that can claim to be genuinely terrifying, Rosemary’s Baby is an unforgettable movie experience, guaranteed to send chills up your spine.