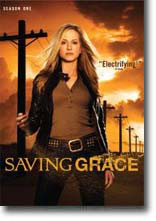 There are very few television shows that revolve around a single figure to the extent that Saving Grace does. Then again, there are even fewer that can boast an actor as good as Oscar winner Holly Hunter in the lead role, and Hunter draws on her considerable chops and charms to bring to life a character who, while certainly sympathetic, isn’t always especially likable.Her Grace Hanadarko, a detective working for the Oklahoma City Police Department’s Major Crimes division, is a mess. We’re barely into the pilot episode (the first of thirteen comprising the show’s first season) before we discover that her married partner is just one of Grace’s many bedmates (promiscuous is one way to describe her; slut is another), and that she’s a heavy smoker and drinker and a foul-mouthed, habitual liar. And that’s on her good days.

There are reasons for all of this, of course–turns out that the death of her sister in the 1995 terrorist bombing that claimed 168 lives is just one of them–but it’s only when Grace commits a particularly stupid and reckless act that the potential for redemption appears in the form of Earl (Leon Rippy), a tobacco-chewing good ol’ boy who just happens to be an angel. A “last chance angel,” to be exact, who suggests that if Grace will simply turn herself over to God, good things will ensue. It won’t be easy.

Despite Earl’s good-natured appeals (along with an occasional spectacular display of God’s awesome powers), Grace is nigh on incorrigible. And while each episode features a crime of some sort, ranging from murder and child abduction to the theft of a million-dollar statue of a steer, creator-writer Nancy Miller (who was an executive producer for The Closer, another TNT series with a strong female lead) focuses much more on Grace’s ongoing struggle to accept Earl’s presence (“Why me?” she asks. “I don’t know,” comes the reply) and do something to clean up her life.

The show’s bluesy, authentic music (including Everlast’s title tune), dry sense of humor, and sexy tone (Hunter, looking very buff, is nearly nude on numerous occasions) are all positive elements; so’s the supporting cast, especially Rippy and Laura San Giacomo (as a police examiner who’s Grace’s best pal). But Saving Grace is all about Holly Hunter, and by and large that’s a very good thing. Bonus features include audio commentary by Miller and others on two episodes and several short featurettes.