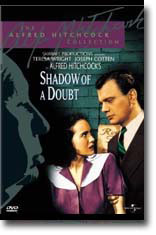 Alfred Hitchcock considered this 1943 thriller to be his personal favorite among his own films, and although it’s not as popular as some of Hitchcock’s later work, it’s certainly worthy of the anyone’s admiration.
Scripted by playwright Thornton Wilder and inspired by the actual case of a 1920’s serial killer known as “The Merry Widow Murderer,” the movie sets a tone of menace and fear by introducing a psychotic killer into the small-town comforts of Santa Rosa, California.That’s where young Charlie (Teresa Wright) lives with her parents and two younger siblings, and where murder is little more than a topic of morbid conversation for their mystery-buff neighbor (Hume Cronyn).

Charlie was named after her favorite uncle, who has just arrived for an extended visit, and at first Uncle Charlie (Joseph Cotten) gets along famously with his admiring niece. At first, Charlie is overjoyed that her favorite uncle has come to visit the family, but she slowly begins to suspect that he is in fact the “Merry Widow” killer sought by the authorities.

The film’s chilling prologue has already revealed Uncle Charlie’s true identity as murderer, and the suspense grows almost unbearable when young Charlie’s trust gives way to gradual dread and suspicion. Through narrow escapes and a climactic scene aboard a speeding train, this witty thriller strips away the façade of small-town tranquility to reveal evil where it’s least expected. Of course, it’s all done in pure Hitchcockian style.