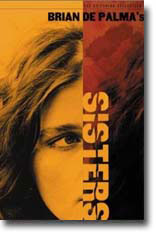 Sisters is not Brian De Palma’s first film, but in many ways it is the first Brian De Palma film, or at least the first to reveal (and revel in) his affinity with Hitchcock. A pre-Superman Margot Kidder struggles with a French-Canadian accent as an aspiring actress whose one-night stand leads to a homicidal morning-after.

Jennifer Salt is a reporter with more moxie than tact or skill who sees the killing from her apartment window across the way. When the police fail to turn up any evidence of the crime, Salt investigates with a private eye (the hilariously relentless Charles Durning), uncovering the secret story of a pair of Siamese twins and a weaselly, stalker doctor. It’s a mystery simmering in a stew of voyeurism, guilt, sex, and obsession.

De Palma borrows from Rear Window, Psycho, and Vertigo (as well as Roman Polanski’s Repulsion), and composer Bernard Herrmann quotes from his own Hitchcock scores (notably Psycho) for the unsettling music, but the result is more original than you might imagine. Laced with dark humor, inventive technique, and impressive technical precision (the split-screen sequences are breathtakingly effective), De Palma flexes his cinematic muscles with thrilling results, right down to the mordantly wry conclusion.

A scary and stylish paean to female destructiveness, De Palma’s first foray into horror voyeurism is a stunning amalgam of split-screen effects, and bloody birthday cakes. De Palma graduated to big-budget thrillers, but this modest little production remains one of his sharpest, slyest, most engrossing films. Long available only in pallid video transfers, the Home Vision/Criterion letterboxed restoration is bright, clear, and beautiful.

A terrifyingly twisted cult classic that wholly deserves Criterion’s exceptional red-carpet treatment. Some people believe “Carrie” brought Brian DePalma his first critical and commercial notice — but it was actually this sinister concoction (starring the lovely Margot Kidder) that paved his way to the big-leagues.