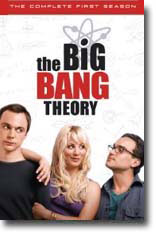 The delightful sitcom The Big Bang Theory revolves around a character type rarely seen on television: The alpha geek. Physicists Leonard (Johnny Galecki) and Sheldon (Jim Parsons) get their lives shaken up when an attractive young woman named Penny (Kaley Cuoco) moves in to the apartment across from theirs.

The key to the show, though, is not that they both fall haplessly in love–Leonard does, but Sheldon remains impermeably aloof and caustic about anything resembling romance or human relationships in general.While the push and pull of Leonard’s yearning for Penny motivates much of the series’ ongoing plot, the show’s real drive comes from Sheldon’s fantastic combination of obsessive-compulsive neurosis and grandiose obliviousness. He’s a brilliant comic creation, imperious and dorky, a seamless collaboration of clever writing and an inspired performance by Parsons.

Whether Sheldon loses his job for insulting his new boss, or finds his ego bruised by a child prodigy, or finds himself unable to bear being part of a lie that Leonard has told, he attacks the world with a relentless need to assert his supremacy–and the results are deeply funny.

The triumph of The Big Bang Theory is that everyone is written with genuine affection; what could have been a lifeless parade of stereotypes–Two Nerds and a Hot Chick–becomes instead a charming collision of cultures. The familiar stuff (computer games, comic books, social incompetence) has the grit of specificity; the show understands the difference between Halo and Halo 3, knows what the Bottle City of Kandor is, and grasps the infinite variety of ways in which a conversation can go terribly awry.

Penny gets less nuance, but Cuoco still gives her a distinctive personality. Kudos as well to supporting players Simon Helberg and Kunal Nayyar, who bring their own variations on geekiness to the table, and to great appearances by some of Galecki’s former cohorts on Roseanne–Sara Gilbert as geekette Leslie and Laurie Metcalf as Sheldon’s fundamentalist mother. All in all, one of the most winning sitcoms in years.