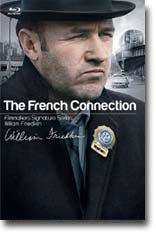 Loosely based upon an actual investigation that led to what was then the biggest heroin seizure in U.S. history, the picture traces the efforts of Doyle and his partner (Roy Scheider) to close the pipeline pumping Middle Eastern smack into the States through the French port of Marseilles. The actual French Connection cops, Eddie Egan and Sonny Grosso, make cameo appearances.

It was widely recognized at the time that Friedkin had lifted a lot of his high-strung technique from the Costa-Gavras thrillers The Sleeping Car Murders and Z, and he even imported one of Costa-Gavras’s favorite thugs, Marcel Bozzuffi, to play the Euro-trash hit man plugged by Doyle in an elevated train station.

This DVD is one of the Filmmakers Signature Series on Blu-ray. This new HD transfer comes with an exclusive 28-page booklet on the making of the film, which includes in-depth actor and director profiles. The French Connection earned 8 Academy Award Nominations and 5 Wins, including Best Director for Friedkin.