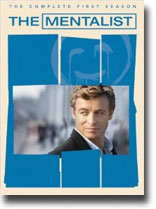 The mentalist is Patrick Jane (Simon Baker in an acclaimed performance), a celebrity psychic whose wife and child are viciously murdered by an elusive serial killer called Red John. Devastated, Patrick admits his paranormal act is fake, renounces his earlier life and uses his astonishing skills of observation and analysis – talents that made him appear psychically gifted – to bring killers to justice.
At crime scenes across California, Patrick now helps an elite team of detectives break their toughest cases. But no matter how many criminals he catches, Patrick never forgets his central goal: Find Red John. And bring him down.
The Mentalist is nominally a police procedural (and an excellent one), but its characters are especially richly written, and there’s romance and torment hinted at in equal measure throughout the series. All of this–and the star turn by dreamy Australian actor Simon Baker, whose smoldering good looks take a back seat to his nuanced acting–make The Mentalist one of TV’s top drama series. Season 1 sets the action in motion immediately, as the viewer quickly learns the backstory: Baker’s character, Patrick Jane, was once a questionable TV psychic (à la John Edwards) who professed to help people contact their deceased loved ones.A crazed killer–“Red John”–was watching one day when Jane mentioned assisting California police on his case, and in retribution he committed a horrific crime with staggering personal repercussions on Jane. Jane leaves his sham life behind, but it turns out he’s actually quite gifted as an observer of subtle human behavior–a “mentalist,” who, he tells the California Bureau of Investigation, “is a master manipulator of thought and behavior.” So Jane joins the CBI in tracking tricky cases, including that of Red John.

The rest of the cast is terrific, especially Robin Tunney, who may have found the role, and series, of a lifetime, as Teresa Lisbon, the head of the squad, who must keep Jane on track but give him enough lead to assist the often skeptical power structure. There’s undeniable chemistry between Jane and Lisbon, yet any potential romance is superseded by a very real-feeling mutual respect and admiration, which shows its own kind of tenderness.

Other stellar cast members include Tim Kang (the all-business Kimball Cho), Owain Yeoman (the ambitious rookie Wayne Rigsby), and Amanda Righetti (the doe-eyed newbie Grace Van Pelt, who may have a lot to learn in traditional police work, but who has a deep understanding of and respect for Jane’s psychic abilities). Another star worth mentioning: The location shots all around California, which give the show a life and depth seldom seen on network series. The lush real settings–a mansion in San Francisco, a weedy rural road outside Bakersfield–add to the immediacy and intensity of the story lines.

The first season boxed set is a bounty and includes all 23 episodes, a fantastic featurette with the cast and creators on making the series, as well as a mini-doc on the difference (and there is one) between a mentalist and a psychic. Fans of the series won’t want to miss the gag reel, either–the cast clearly has as much fun making the show as its fans do watching it.