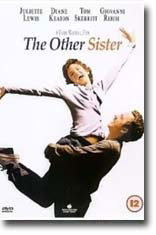 Filming a love story centered on two mentally challenged people is a touching idea, one that’s been attempted in films such as Benny and Joon and even, to a certain extent, As Good As It Gets.The Other Sister is another addition to the genre, a well- acted comedy-drama centering on the romance of Carla (Juliette Lewis) and Daniel (Giovani Ribisi) and throwing in some general family angst as a secondary story line. The acting is tremendous and Lewis and Ribisi both give convincing performances without condescending to their characters.

These fine actors drown in a sea of mediocre writing, and we’re left with a film with no real conflict or tension. Will Carla and Daniel make it work? Well, of course. Will mother Elizabeth loosen up about her “gay workaholic” daughter and let Carla live her own life? Do you really need to ask?

There are a few cringe-worthy moments that have a sense of truthfulness, such as when Daniel stands up at Carla’s sister’s wedding to announce his feelings. But otherwise, these characters live in a pampered, fairy-tale world where the worst thing that happens to them is that the meanies at school put chewing gum in Daniel’s bike helmet. Ultimately, this is a sweet, albeit occasionally saccharine, tale that will move those who are looking for cheerful fare.

The overwhelmingly fine performances by Lewis and Ribisi that are of the quality of commitment that seeing them on repeated viewings just fortifies the brilliance of their acting. These two people are people we readily love and grow to feel their fears, pain, frustration, and dreams. If ever there was a film that was able to read from the inside of the minds of the mentally challenged and find the mysteries there, then this is the film. An outstanding cast and a very fine director in Garry Marshall make this movie a keeper.