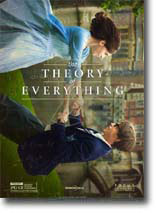 Despite this — and with Jane at his side — he begins an ambitious study of time, of which he has very little left, according to his doctor. He and Jane defy terrible odds and break new ground in the fields of medicine and science, achieving more than either could hope to imagine.

One of the things that catches your attention is how Hawking always manages to crack a smile and never showed a lick of hate. It made me wonder about how we can look to the inside and see what we can do to better ourselves or others that Hawking had done.

There’s a moment towards the end where he gives a speech in front of an audience about his new book ‘A Brief History Of Time‘ and life in general. A girl drops her pen while listening to Hawking speak and we then watch him imagining himself getting up to pick the pen up off the floor. He had every intent to want to teach and help those who were eager to learn.

James Marsh went about a visually appealing and telling look through the life of Stephen Hawking with metaphorical references to our existence in the galaxy and space. It was difficult to watch at times as Stephen’s condition worsened and the more he lost control of his movement. There was weight to Eddie Redwayne’s character that was more then meets the eye. If your going to watch ‘The Theory Of Everything‘ be prepared to see life in whole new way.