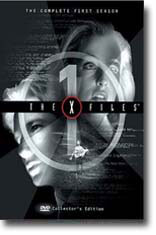 This collection features all nine seasons as well as the The X-Files: Fight The Future feature film.  In the first season of The X-Files, creator Chris Carter was uncertain of the series’ future, so each of the episodes is a self-contained suspense story; they do not delve deep into the ongoing X-Files mythology or turn to self-parody and humor as do episodes in later seasons.

These episodes display the elements for which the show would become famous: the cinematic production values and top-notch special effects, the stark lighting of the Vancouver sets, the atmospheric halo of Mark Snow’s score, and the clever plots dealing with subjects ranging from the occult, religion, and monsters to urban legends, conspiracy theories, and science fiction. Most importantly, season 1 introduces FBI agents Dana Scully (Gillian Anderson) and Fox “Spooky” Mulder (David Duchovny).The second season found the show confidently hitting its stride. Building on its earlier success, the show evolves, and in these 25 episodes, a glimpse is shown of a longer-running story line (which will continue through subsequent seasons) that is woven into the usual stand-alone episodes of the paranormal. These so-called mythology episodes hint at a global conspiracy involving sinister government agents, UFOs, alien abductions, genetic engineering, the ever-lurking Cigarette Smoking Man, and Fox Mulder’s father.

By its third season, The X-Files had grown from a cult hit to a global phenomenon, becoming the most popular show in many countries outside the U.S. Armed with the knowledge that the show was here to stay, series creator Chris Carter expanded its mythology, and the 24 episodes in this boxed set represent arguably the strongest of all the X-Files seasons.

In season four, The X-Files continued to expand the breadth and complexity of the mythology established in the previous two seasons while developing a deeper, romantically ambiguous relationship between its photogenic leads, FBI Special Agents Mulder and Scully.

The midpoint of what would be a nine-season show, the fifth season of The X-Files (the first to be put on DVD in anamorphic widescreen format) gives fans a heavy heaping of what they love. Following the X-Files feature film in the summer of 1998, “The Beginning” quickly crowbars an attempt at fitting the film into the TV chronology before it picks up plot points left dangling from the fifth-season finale. With the original conspiracy plot arc having fallen into a muddle of loose ends, once-hungry lead actors on the verge of big-screen careers and making demands for more time off or shots at writing and directing.

The eighth season of The X-Files will always be remembered as the year of brave decisions. Though season 9 may not be the best period in a long line of groundbreaking television, it is still worthy of the X-Files name.