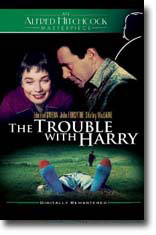 A busman’s holiday for Alfred Hitchcock, this black comedy concerns a pesky corpse that becomes a problem for a quiet, Vermont neighborhood. Shirley MacLaine makes her film debut as Jennifer Rogers, one of several characters who keep burying the body and finding it unburied again. Hitchcock clearly enjoys conjuring the autumnal look and feel of the story, and he establishes an important, first-time alliance with composer Bernard Herrmann, whose music proved vital to the director’s next half-dozen or so films.

The film follows the quirky but down-to-earth residents of a small village in Vermont in the autumn, as they deal with the freshly dead body of a man, which has inconveniently appeared on the hillside above the town. The problem of what to do with the body, and more importantly how and why he was killed, is the eponymous “Trouble with Harry”.

Three of the main characters in the film imagine that they are the one who actually killed this person. Captain Albert Wiles (Edmund Gwenn) is sure that he must have killed the man with a stray shot from his rifle when rabbit hunting. Miss Ivy Gravely (Mildred Natwick) feels that the man died after a blow from her hiking boot, and so on. Sam Marlowe (John Forsythe), an attractive and free-spirited artist, is quite open-minded about the whole event, and is prepared to help his good-natured friends and neighbors in any way he can.

It turns out that the dead man is in fact Harry, the estranged husband of an attractive and feisty young woman, Jennifer Rogers, (MacLaine), who lives in the village along with her small son Arnie (Jerry Mathers). Jennifer Rogers thinks that her husband may possibly have died after she hit him with a bottle. In any case, no-one is actually upset about what has happened.

However, none of the principal characters want this death to come to the attention of the “authorities” in the form of cold, humorless, Deputy Sheriff Calvin Wiggs (Royal Dano). The main characters conceal the body by burying it, and then have to dig it up again. This happens several times. The body is also concealed at one point by hiding it in a bathtub.

In the end we discover that Harry actually died of natural causes, and no foul play was involved. In the meantime, Sam and Jennifer have fallen in love, as have the Captain and Miss Gravely. Sam has been able to sell his paintings to a passing millionaire. The artist refuses to accept money, and instead requests a few simple gifts for his friends and himself.