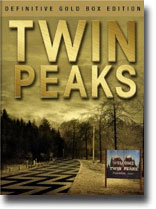 Twin Peaks lived in its own bizarre, dark, amazing, fantasy world, fresh from the mind of creator David Lynch. The extra features on this Gold Box edition (which includes both seasons and the long-awaited pilot) intend to draw you into the milieu surrounding the world of the story, and offer you a glimpse into the gestation and making of the show, while gently poking fun at itself.
To quote Lynch at the beginning of A Slice of David Lynch, “This is the strangest damn thing.” He’s referring to the act of sitting on a set in Los Angeles, drinking coffee and eating cherry pie with cast members Madchen Amick, Kyle MacLachlan, and personal assistant John Wentworth years after the show ended. But he may as well have also been referring to the show itself, and to the enormous popular phenomenon it accidentally became.As can be inferred from the title, A Slice of Lynch is a glimpse inside the creative mind of Lynch through his interactions with his old stars and assistant, and watching this, you can’t help but understand that Lynch operates on a different plain from normal humanity, and his artistic process, while often befuddling, yields incredibly original results to a degree that almost boggles the mind; happy accidents seem to stem from almost every artistic decision he makes. The strength of this feature is that it makes it clear that the world of Twin Peaks really existed, it just happened to live in the minds of David Lynch and co-writer Mark Frost.

Twin Peaks Festival is almost an afterthought, it doesn’t fit with the rest of the features in depth or insight, but curious fans will get a kick out of seeing what happens when the most rabid, hardcore Twin Peaks gather in the Northwest–on the sights of many of the show’s scenes–for a fan festival that beats the heck out of any Star Trek convention. Secrets from Another Place: Creating Twin Peaks offers a meaty, four-part look into how the show came about, the filming of both seasons, and the creation of the music by composer Angelo Badalamenti and singer Julee Cruise.

Black Lodge Archive features six different items ranging from the “Falling” music video to bumpers and galleries that don’t do much to offer insight into the show, but they offer an unexpected, added bonus: watching Agent Cooper hawk Georgia Coffee in ads that aired only in Japan. They are quite possibly more hilarious and bizarre than anything in the show itself. The features do a great job of reminding an old audience, and explaining to a new one, why the show had such a devoted following.