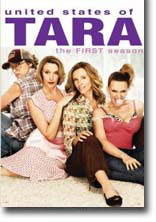 The United States of Tara is an off-centered Showtime series that has a slew of characters all in one person–prim and proper suburban housewife Alice, beer-swilling hell-raiser Buck (a male), and hard-partying teen T. All of them are portrayed by Toni Collette, who deservedly won an Emmy for her astonishing performance(s) as Tara, a wife and mother struggling with dissociative identity disorder.The first episode establishes the series’ high concept, but the show quickly finds its groove as it explores the turmoil of Tara’s life and the effect DID has on her marriage and family: her exceedingly patient and supportive husband Max (John Corbett), who has to fight off Tara’s more sexually aggressive “alters”; her sensitive son Marshall (Keir Gilchrist); rebellious teenage daughter Kate (Brie Larson); and resentful sister Charmaine (Rosemarie DeWitt).

As the series begins, Tara has stopped taking her meds, which opens the doors for her other personalities to reveal themselves, usually at stressful or inappropriate times. In the first episode, Tara/Buck beats up Kate’s physically abusive boyfriend. In another, she appears at a parent-teacher conference as Alice.

This first season establishes Tara’s uniquely dysfunctional family dynamic (“It doesn’t have to be weird,” Tara offers at one point as she is debriefed about one of her alter’s latest shenanigans) and is propelled by the mystery of what traumatic incident caused Tara to crack. Diablo Cody, the Oscar-winning screenwriter of Juno, created and cowrote the series, and for the most part she cools it with the distracting Cody-speak.

This series power-jams it with a superb ensemble cast, including Valerie Mahaffrey  as Tara’s overwhelmed therapist, Patton Oswalt as Charmain’s sometime lover, Nathan Corddry as Kate’s too-attentive boss, and Pamela Reed and Fred Ward as Tara’s parents. The United States of Tara is an unconventional family dramedy and a sly look at gender roles (“Over the course of a day, how many different women do we have to be?,” a well-meaning new friend asks Tara at one point). And Collette is a marvel to watch.