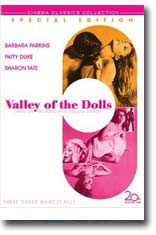 Lured by their dreams of fame and fortune, three ambitious young women enter the world of show business and discover how easy it is to sink into a celebrity nightmare of ego, alcohol and ‘pills’ – the beloved “dolls.” A prim New Englander (Barbara Parkins) unexpectedly skyrockets from her job as secretary in a talent agency to a glamorous TV model.

A determined singer (Patty Duke) finds that Hollywood success can also spell self-destruction. A beautiful sex symbol (Sharon Tate) is torn between the money commands and the shame of feeling exploited. Based on Jacqueline Susann’s phenomenal best-seller about the underside of Hollywood, this fascinating melodrama was once seen as a shocking behind-the-scenes look at how show business creates instant stars, destroys romances and changes personalities forever.

They don’t make ’em like this anymore. Well, John Waters might, if he ever had a big enough budget. A steamy “inside look” at the alternately sleazy and glamorous world of catfighting, backbiting show-biz starlets, this Hollywood hit from the bestselling novel by Jacqueline Susann is a high-gloss camp artifact–a time capsule (or some kind of capsule, anyway)–from the screwy ’60s, when a broad was a broad, a bitch was a bitch (whether “her” name was Neely O’Hara or Ted Casablanca), and a “doll” was a prescription drug. These dames of whine and poses obsessed over their bust lines, booze, and barbiturates.

The once-shocking and scandalous language and behavior of these Broadway babes has been eclipsed by Dallas, Dynasty, and Melrose Place, but time has only enhanced the stature of Valley of the Dolls as a classic–and it still puts Showgirls to shame. With Patty Duke, Susan Hayward, Sharon Tate, Lee Grant, Barbara Parkins, and Martin Milner (and juicy, scene-chewing dialogue such as the infamous: “They drummed you out of Hollywood, so you come crawling back to Broadway. But Broadway doesn’t go for booze and dope–now get out of my way, I’ve got a man waiting for me!”), Valley of the Dolls is the Mount Rushmore of backstage movie melodramas.