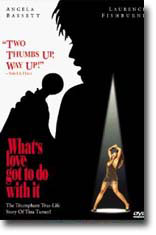 Tina Turner (Angle Bassett), that dynamic diva of pop/soul/R&B from the ’60s to the ’90s, sings like a woman whose life story is every bit as rough and tough as her voice. And What’s Love Got to Do With It, based on her autobiographical account (in I, Tina, written with Kurt Loder) of her years under the iron fist of her abusive husband (and musical partner/Svengali Ike (Laurence Fishburne), is further proof of what we’ve always known about Tina: She’s what you call a survivor.

The movie is sort of the Disney version of Tina Turner’s story–a glossy but thoroughly enjoyable, old-fashioned showbiz biopic with laughs, tears, great music, and outrageous (but faithful) period decor, costumes, makeup, and hairstyles. Our heroine triumphs not only over the rigorous demands of her career in the music business, but finally manages to bust out of her troubled, violent marriage as well and become her own person. This is a movie that’ll have you shouting at the top of your lungs: “You go, girl!”

Celebrity bio-pics are very hit or miss, but once in a great while a really good one comes along–and What’s Love Got to Do With It is one of them. The film offers an intense portrait of her rapid rise to stardom under the sponsorship of husband-manager Ike, a relationship that quickly turned dark and became increasingly abusive as Tina’s fame began to outstrip Ike’s own.

The film is well-crafted and the two leads offer powerhouse performances. Bassett is simply astonishing as Turner; where most other actresses might have simply imitated, Bassett accomplishes the impossible: she makes you believe that she is Tina Turner, capturing both Tina’s famous on-stage performing style (the concert scenes are really exciting) and giving a completely believable interpretation of her off-stage personality as well. The script offers Fishburne little more than a one-dimensional role as a manipulative abuser, but he plays it brilliantly from start to finish, and both are well supported by the overall cast.

There is certainly a great deal more to the lives of both Ike and Tina Turner than this film conveys–but what it does show it presents with considerable power and conviction, and by the time Tina finally hits back at Ike you’ll be roaring for her to hit him again–and again–and again–and eager to see her finally triumph entirely on her own.