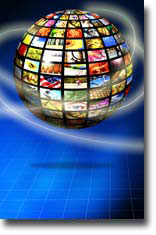 Sling TV is the first streamed alternative to traditional cable and satellite TV, providing a number of live channels for significantly less than standard pay TV packages, with no contract or commitment. Sling TV works anywhere in the U.S. All you need is a stable broadband Internet connection and your video quality is pretty much as good as cable TV.

Sling TV does have its limitations. You can only watch on one device at the same time. Most channels don’t allow you to pause, rewind or fast-forward. And while there are a few on-demand options and authenticated channel apps, like Watch ESPN, the number of them is currently small.

Sling does not have a DVR service and it’s not possible to jury-rig. Some channels include an impressive feature called “3-Day Replay,” which lets you scroll back in time to any show from the past three days. These channels also include a selection of on-demand shows, and allow you to pause, rewind and fast forward whatever you’re currently watching. The problem is that only a relatively small number of channels in Sling TV’s basic lineup offer 3- Day Replay. The channels that choose not to support this feature don’t let even let you pause or rewind the current show, and subsequently don’t offer any programs on demand. This just shows how scarred some networks are about disrupting their cable-TV relationship.

Additionally, Sling TV does not include basic networks like ABC, CBS, NBC and Fox, so you’ll still have to get them the old-fashioned way: With an antenna. You can also get this content from most networks on services such as Hulu. If you’re willing to wait, you can get virtually every network series eventually on good ole Netflix.

Overall the service looks great and is functionally stable, but its performance – as users have noted in the comments – will definitely vary depending on your connection speed. The bottom line is that Sling TV’s bargain price and freedom from contracts make it well worth it for cord-cutters.

So why do I love Sling TV so much? Primarily because they made it a lot easier for me to cut the cord. Just knowing that I can watch Major Crimes on TNT and Fixer Upper on HGTV helps me sleep a little bit better at night. Thank you and good night, Sling TV.