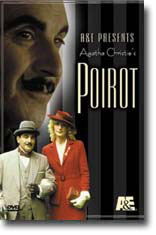 This whodunit series based on Agatha Christie’s crime novels and short stories, is named after its star sleuth, Hercule Poirot, a famous former Belgian policeman, who settled for good in London after the war, soon so famous as an infallible private detective that he becomes a society figure in his own right.

In each episode Poirot gets to solve a crime mystery – mostly murders – for a paying client or otherwise catching his attention, generally along with his faithful English sidekick Captain Hastings and/or his Scotland yard ‘friendly rival’ Detective Chief Inspector Japp.

Poirot starts with a great script, the famous Poirot novels and short stories by Agatha Christie, and manages to complete it with an excellent performance by the cast and the direction. Modern shows can’t even begin to achieve the quality that this show created. In fact, I’m still wondering what people find so extraordinary in modern shows, and the fact is, the only reason people watch them is because they´re new and they constantly break taboos, there’s absolutely nothing more to them.

A simply brilliant show, David Suchet never fails to deliver an endearing and powerful performance as Hercule Poirot, the most entertaining (mostly because he\’s so unintentionally humorous) and ingenious Belgian detective the screen has ever seen.

Overall, the show balances drama, comedy, tragedy, and romance well – so just about everyone should be pleased. With a great supporting cast of Pauline Moran as the lovely Miss Lemon, Hugh Fraser as the forever-perplexed Captain Hastings, and Philip Jackson as the gruff but kind Chief Inspector Japp. Poirot really is a rare gem that’ll steal your heart.