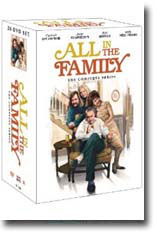 Few television shows have left as substantial and enduring a footprint on American popular culture as Norman Lear’s masterpiece All In The Family. This groundbreaking comedy series looked at the state of the world through the eyes of an argumentative but loving family and gave us some of the most fully dimensional characters in television history. The jokes had a million targets, aiming at race, politics, sex and human foibles, but the humor was firmly rooted in the characters of Archie, Edith, Mike and Gloria.
This complete series set is a long-overdue celebration of the enormously influential program and offers fans a collection to treasure for years to come. Includes a new interview with Norman Lear, documentaries, original pilots, a 40 page collectible book with essays by television critic Tom Shales and media professor Marty Kaplan and more.There are many wonderful episodes of All in the Family, so many that it’s practically impossible to pick a favorite. One stellar show was the episode in which Sammy Davis, Jr. comes to visit the Bunker household to retrieve his briefcase after losing it in Archie’s taxi cab; this episode couldn’t have been done any better and the very last second or two showed a gag Davis played on the whole crew without any advance notice. The way the audience roared proved again this was a special television sitcom far above the ordinary in terms of quality.

Other fantastic episodes that come to mind at an instant include the one in which Edith’s cousin Maude (Beatrice Arthur) comes to visit when Edith and the rest of the family are ill; the time when a computer accidentally marks a hole in a punch card indicating that Archie is deceased; the two-part episode when Gloria gives birth to a baby boy named Joey (not to mention how Archie handles the whole thing when Mike and Gloria don’t want baby Joey baptized); the episodes that deal with homophobia; episodes that feature the Jeffersons, an African-American family living right next door to the Bunker household–and so many more.

I highly recommend this DVD set for fans of the principal actors in All in The Family; fans of the actors portraying others like The Jeffersons and Stephanie Mills (played by Danielle Brisebois) would do well to get this, too. In addition, people who appreciate groundbreaking sitcoms with frequently timeless jokes, sight gags and top-notch comedy will not be disappointed.