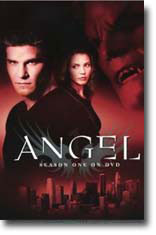 He’s hunky, he’s brooding, he’s a do-gooder, and he was Buffy’s first boyfriend. Angel, the tortured vampire destined to walk the earth with a soul, got his own series after three seasons on Buffy the Vampire Slayer and did what any new star might do: he moved to L.A. (the City of Angels–get it?) and set up shop.

Angel finds the titular vampire (David Boreanaz) as a kind of supernatural private investigator, fighting evil one case at a time and, like his ex-girlfriend, keeping the world from getting destroyed by vengeful demons and such.

A darker, more film noir version of Buffy, Angel lacked the peppy humor that permeated Sunnydale but more than made up for it in its soul-wrenching gravitas, and it elevated Boreanaz to leading-man status, a role he filled out ably and then some.

Initially, the stoic vampire was paired with Irish demon Doyle (the late Glenn Quinn) and fellow Sunnydale transplant Cordelia (Charisma Carpenter), but Angel finally found its footing when Doyle was dispatched (giving his powers of precognition to Cordelia) and replaced by Buffy alum Wesley (Alexis Denisof), a fallen watcher who, like his friends, was hoping for a new start in L.A.

Pesky law firm Wolfram and Hart (a front for the demon mafia, as it were) reared its ugly head and discovered Angel’s presence, thus setting the stage for a battle of good and evil–and if you’re a regular Joss Whedon fan, you know that it’s a never-ending war. Angel was always going to have a hard job living up to the expectations set by Buffy, but  this series is superb in its own right.