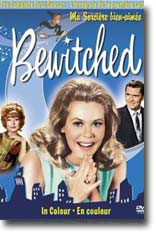 According to a retrospective segment included on this four-disc set, the Stephenses were also the first couple to sleep in one bed! And Samantha’s mother, Endora (the venerable Agnes Morehead), and father, Maurice (Maurice Evans, most popularly known as Dr. Zaius in the original Planet of the Apes, were TV’s first separated couple.

Surely, Darrin did for advertising what Dick Van Dyke’s Rob Petrie did for comedy writing. And nose-twitching Samantha certainly gave Mary Tyler Moore’s Laura Petrie a run for the money in the sexy suburbanite sweepstakes.

This high-concept series’ saving grace was that Darrin insisted that Samantha not engage in any “hocus-pocus.” But in this first season, she would be compelled to use her extraordinary powers to right social wrongs (such as derogatory-witch stereotypes in the Halloween episode “The Witches Are Out”), champion the underdog (a lonely boy whose overprotective mother won’t let him play baseball in “Little Pitchers Have Big Fears”), or to restore a troubled boy’s Christmas spirit (“A Vision of Sugar Plums”). Or, she might just want to turn the tables on an insulting former girlfriend of Darrin’s (the pilot, “Darrin, Take This Witch, Samantha”). York and Montgomery had palpable chemistry.