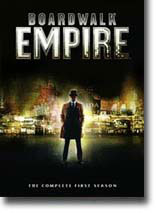 Nucky’s other associates include his sheriff brother Eli (Shea Whigham), sexpot girlfriend Lucy (Paz de la Huerta), and distributor Chalky (The Wire’s Michael K. Williams). If Nucky has little regard for law and order, his soft side emerges in his dealings with Irish immigrant Margaret (Kelly Macdonald, excellent), who segues from abused wife to kept woman.

As Nucky puts it, “I try to be good. I really do.” After he sends Jimmy away a spell, his sidekick joins forces with Al Capone (Stephen Graham, Public Enemies) and disfigured vet Richard Harrow (Jack Huston), abandoning his son, common-law wife Angela (Aleksa Palladino), and mother Gillian (Gretchen Mol), who has a fling with Lucky Luciano (Vincent Piazza).

Inspired by Nelson Johnson’s book, Boardwalk Empire takes a Deadwood-like approach to history by combining characters both factual and fictional with blue language and ladies without brassieres. Winter, who won an Emmy for The Sopranos episode Pine Barrens, takes liberties with the historical record, but the series never claims to represent the truth and nothing but–which is only fitting when everyone’s hiding secrets. If the entire ensemble deserves praise, Buscemi rules the show as thoroughly as Nucky rules the city.