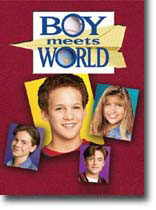 Boy Meets World follows Cory (Ben Savage), Shawn (Rider Strong) and Topanga (Danielle Fishel), as they survive the trials of junior high, high school and college. Cory is your average guy. He has a best friend from the other side of the tracks, a teacher that constantly keeps him on his toes, and a friend named Topanga whom he has trouble understanding.

With the support of his parents and his brother Eric (Will Friedle), Cory learns to cope with the roller coaster called growing up.The show starts with Cory as an average eleven year old boy. He has a best friend from the other side of the tracks, a teacher that constantly keeps him on his toes, a classmate named Topanga who he has trouble understanding, and a family that keeps his life interesting – including an older brother who seems to become more idiotic as the show progresses.

As years wear on and Cory grows up, everything gradually changes. Shawn begins to feel the strains of his lees than perfect life, Topanga become more than a friend, and the constant spinning of the world leads up to Cory slowly becoming less naive and more responsible.

Boy Meets World wasn’t afraid to discuss difficult subject matters and this gave it a ‘real’ feeling to it. In short it is not the cookie-cutter pop shows that Disney spews out to kids nowadays.This show grew up with it’s viewers and rewarded it’s fans with simple lessons to help them along their way.